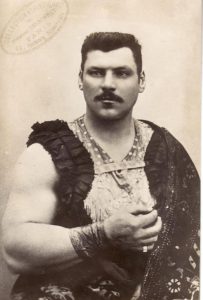 A favourite of ours on Vintage Strongman, Appollon was a man of immense strength. He was by all accounts naturally lazy and had to be roused in order to display his immense natural strength. One such story can be found in an article by Ed Theriault  :

At Professor Desbonnet’s School of Strength during the early nineties in France, a group of graduate “pupils” were gathered. One of these was the famous strong man of Luxembourg, John Grun Marx, and on this day he had brought a friend. As the two walked into the gym, the good-natured Marx, who loved a good joke, winked at the others and nodded toward his companion, a giant of a man. “Louis, I am going to show you a stunt that nobody else can perform. Watch!”

In the center of the floor was a dumbbell – not an ordinary dumbbell, but the Professor’s famous “challenge” bell: it weighed 226 pounds and its handle measured 2 3/8 inches. One of the three men in the world to have lifted this ponderous weight from the floor was John Grun Marx. He now showed off his prowess.

Lifting the dumbbell and standing up with it – first with one hand, then the other – Marx grinned at his giant of a friend, who watched curiously. “Yes, Louis – no one else in the world can do this – NO ONE!”

Louis grew red in the face while the other athletes in the room smiled broadly. Like a huge jungle cat, the big man leaned forward as though to spring, and his hands opened and closed like a lion’s straining claws. “Stop playing with that thing, John,” he muttered, “and we’ll see if no one else can do it!”

Marx, looking innocent, put down the dumbbell and moved away. “All right, Louis – try it, but be careful.”

With almost a roar, the big man pounced on the dumbbell. Grabbing it with his right hand, he yanked it from the ground. Did he stop at the hang position: No. Did he pull it to his waist? No. He rammed the massive weight all the way over his head in a one-hand snatch – but because he did not dip under it, the bell flew out of his hand and over his shoulder, to land with a splintering crash ten feet behind him!

To lift a dumbbell of that weight and handle thickness off the floor is a world class feat. The modern equivalent would be using the dumbbell pictured. This is a solid cast iron bell with a 60mm grip and weights around 106kg. This is a bell I have in my collection and is a challenge 2 handed ,let along with one.To my knowledge no one has ever pulled a dumbbell like this overhead in a one hand snatch style lift. 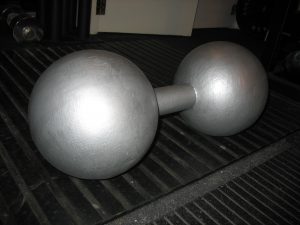